Secure your funding now
Apply in under 60 seconds

ENTER YOUR POSTCODE TO SEE IF YOU QUALIFY

Secure your funding now… We would love to help you improve your homes energy efficiency and save you money… Claim upto £30,000 in energy saving grants with no repayment necessary…
Apply Now
Solar Batteries


The use of solar power to generate energy and electricity for domestic use is taking the world by storm. However, there are some challenges faced by solar power consumers; a major challenge is the efficient use of solar energy. The energy generated by the solar powers is at times more than what the consumers require, making the energy go to waste. But then, at times when sunlight is absent, for example at night time or during seasons with very little sunlight, consumers have no way to generate electricity from solar energy.

In addition to this, the amount of solar energy generated globally is very insignificant to the enormous amount of solar energy that is available. If there were means to store all this renewable energy, the world could easily eliminate the environmental damage caused to the globe due to the burning of fossil fuels. 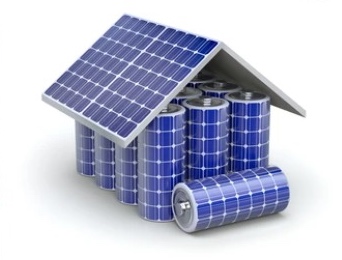 To solve this problem, the concept of batteries for solar energy was created. Simply put, solar battery storage is a type of reservoir that keeps the excess solar energy generated in itself. This excess energy is then utilized at times where real-time solar energy is insufficient and unavailable, such as nights, winters, or power outages.


Energy Storage System (ESS) is a device that is used to bridge the gap between dynamic energy supply and demand. The ESS stores the energy generated to be used in the future.
The main components of an ESS are:
Energy Source: This is the most obvious part of the storage system, to store energy, one needs an instrument to create energy. The most common source of energy that is used within the ESS is solar energy. Solar panels are, therefore, used to convert sunlight into electricity, particularly DC electricity. DC is the favorable type of current to be stored as it is convenient for domestic and commercial regions.
Inverter: Inverter is an essential part of the ESS. Although it is much convenient to store electricity in the DC form, in actuality, the devices and electronics used in residences and even commercial shops require AC. Henceforth, for the current to be utilized, a device is required that would convert the stored DC electricity into AC electricity.
Battery/ Storage Device: The battery is the focal part of the ESS, as it is where the DC is stored, and then utilized later. The most common chemicals that are used to create a battery are lithium-ion or Lithium Iron Phosphate Technology. The main purpose of this component is to transform the energy received from the panel (solar energy) into chemical energy. And when it is time to use this preserved energy, the batter transforms that chemical energy back into electrical energy.
Energy Monitoring System: Although this component of the ESS is undervalued, it is a very integral part of the system. The ESS has a sensor that supervises the entire functioning of the ESS, starting from the daily supply of energy from the panel, to the daily consumption of energy from the ESS. The system alerts the consumer of any discrepancy or malfunction that could take place.

Secure your funding now
We would love to help you improve your homes energy efficiency and save you money…
Claim upto £30,000 in energy saving grants with no repayment necessary…
Apply Now